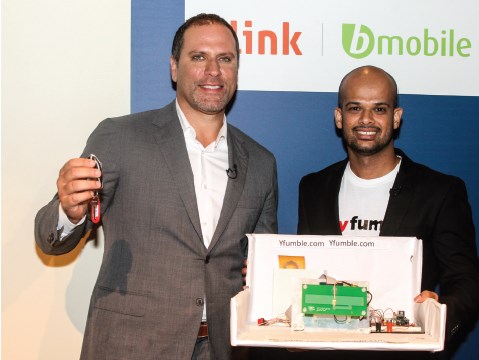 Kevan Sinanan walked onto the set of the Planting Seeds TV show anxiously clenching the Yfumble invention that he had engineered in his garage, a gadget made to identify keys faster.
When he made his pitch, not only was he sharing his vision with a panel of investors, but he was also presenting his product to viewers across the entire Caribbean region. Even so, fear of failure didn’t hold him back as he confidently explained his product and its functionalities. Yfumble is a device made to identify the correct key that is needed when approaching a door or locked entry point. The key is equipped with a light attached to it, which would illuminate when the particular key is needed.

During Sinanan’s pitch, Planting Seeds investor Joseph Rahael, Director of Amera Caribbean Development Ltd., listened intently. Given Rahael’s background in real estate and land development, the gadget did not instantly pique his interest. However, Rahael was impressed by the young inventor’s presentation, and wondered, “If he can create such a product, what else is he capable of?”
After the pitch, the investors grilled Sinanan, who was able to return solid answers with ease and confidence, proving that he knew exactly was he was talking about.
Then it was crunch time, and Rahael, inspired by Sinanan’s passion, made an offer. Sinanan was interested but wanted to wait and see if any other offers were on the table. However, Rahael said he was making a one-time offer, warning Sinanan that if he went elsewhere there would be no deal. Sinanan took a minute to think, looked up, smiled, and said, “I accept.”
Right here in Trinidad and Tobago, two people with completely different backgrounds were able to cross paths and discover overlapping business interests—all thanks to the platform provided by Planting Seeds. Rahael’s enthusiasm for “passionate people” and Sinanan’s love of inventing came together to create a new business partnership, with each person feeding on the other’s drive and potential.
After his appearance on the show, Sinanan went on to say that securing financing for his dream was not the most valuable thing he got out of his experience on Planting Seeds; the UWI graduate shared that Rahael has taken his understanding of business strategy and growth to the next level.

Presently, Sinanan and Rahael are working to expand the uses and functionalities of the Yfumble product, which originally operated by matching keys to locks with a single battery. Now they are seeking to move beyond this to create a product that is even more dynamic and useful. It is estimated that the improved, final prototype will be fully functional and ready for mass production in Trinidad by August 2017. Then, the next crucial steps will include market testing and pricing analysis before tapping into the global market via Amazon.com. Along with expanding on Yfumble’s functionalities, Sinanan and Rahael are already working towards meeting Amazon’s criteria for selling patented products internationally.
The team at Planting Seeds Caribbean is honoured to highlight this inspiring story of local entrepreneurship—another Planting Seeds success!